Boat captain Todd Hindman, 21, raised on the water, wastes no time working hard to live out his nautical dreams. 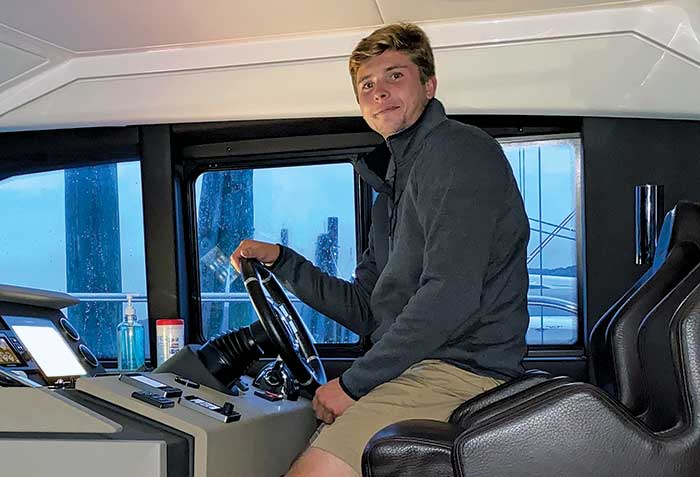 Todd Hindman at the helm of an Azimut motoryacht headed out of Cold Spring Harbor on New York’s Long Island.

The ultimate fantasy is to set a life course to follow one's passions, ideally earning a living in that pursuit. Sometimes life has other plans, and people get busy being busy. Todd Hindman, 21, has no patience for "one day." Whether he's at the helm of a powerboat, sailing, or fishing, he's almost always on the water. When he was just 20, he earned his 50-Ton Master Captain's license.

Hindman comes from a long line of boaters. He grew up sailing on an old Tartan 34C first owned by his great-grandfather. The family kept the boat in Long Island Sound. "We'd do trips to places like Block Island," he recalls. "It was what I grew up doing."

Up until five years ago, that boat was part of the family, passed down from great-grandfather to grandfather and then to his father. "It was heartbreaking when it was time to sell," Hindman says of Alisa. "It was the family pride and joy. Every weekend, every day that we could, we were on that boat."

"He has been on a boat since infancy," says Todd's mother, Paige Fairchild. "I used to put him in a little hammock on our Tartan and he'd fall asleep underway. We sometimes were out for two or three weeks at a time." Hindman took his first boating safety class at age 12, is an avid angler, got his first job as a deckhand when he was 14, and earned his captain's license while getting a degree in history at Hobart College in Geneva, New York. He now works full-time as a service writer at McMichael Yacht Brokers in Mamaroneck, New York, and on weekends captains for clients who own boats ranging from 50 to 75 feet. 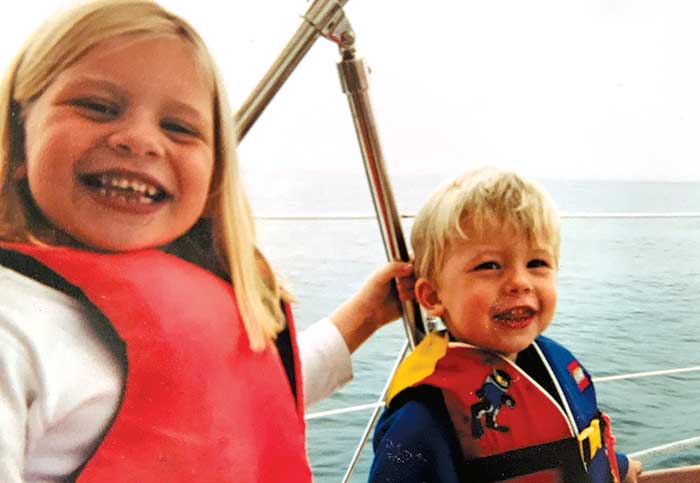 Todd (3 or 4 years old) with his sister, Caroline, sailing on the family’s Tartan 34C.

"It was hard for a few owners to trust me when I first jumped on their boats," Hindman says. "But eventually they saw that I was capable." The trips are sometimes just day trips on Long Island Sound; other times overnights to places like Block Island or Montauk.

He recently delivered a Hanse 458 from Baltimore to New York with a coworker, and describes the 45-hour trip as "a blast! We went straight through the night. It got hectic in the Chesapeake. There was a lot of traffic at 3 in the morning!"

He doesn't have much free time but says he's happy working nonstop as his work is his passion. "I love the ocean, and being out there. It's calming. The fact that there's so much to be explored is unbelievable. I love exploring." He dreams of crossing the Atlantic.

Kelly MacLeod, who was born into a boating family, is a writer and editor and is happiest on the water. While she enjoys power boats, she began sailing at 6 years old and enjoys both racing and cruising and owns a Beneteau 40 with her husband. They have sailed various places in the Caribbean and their home port is Pensacola Beach, Florida, where they spend as many nights on the boat as they can until they can do more extended cruising.