States in the northwestern U.S. have stepped up vessel inspections in an effort to slow the spread of invasive species. 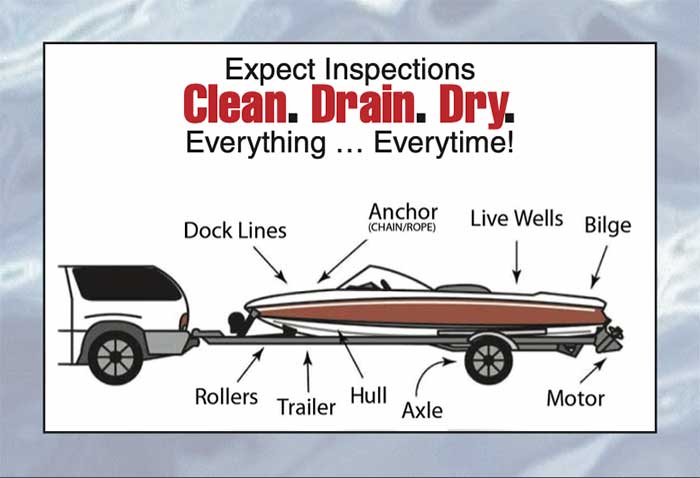 Bringing a boat to Idaho, Wyoming, Montana, or other western states? You'll see plenty of road signs about boat inspections designed to slow the spread of Aquatic Invasive Species (AIS). One BoatUS editor who traveled to several western states this year said that nearly every state border crossing had signs directing boaters — including PWC owners, canoeists, and kayakers — to truck weigh stations or other facilities for mandatory AIS inspections. Many states even require stand-up paddles boards (SUPs) to be inspected (inflatable SUPs may not require inspections in some states, but check with the state to be sure).

Western national parks and recreation areas such as Flaming Gorge, Grand Teton, and Yellowstone also require inspections before any boat can be launched in their waters. Some states such as Montana require inspections if you are crossing the continental divide, even if your boat has already been inspected when entering the state.

In many western states, all boaters, whether local or out of state, must pay a fee and may need to display an AIS decal on their boat. Fees from the decal reportedly go towards state efforts to slow the spread of AIS. Inspections and decontaminations at inspection stations and national recreation areas are typically no charge.

Read this article for more on preventing the spread of AIS and how to properly clean your boat and trailer.

In an effort to help stop the spread of aquatic invasive species (AIS), the Water Sports Industry Association (WSIA) partnered with major sportboat manufacturers in 2020 to develop new modifications to boat design and best practices. The companies agreed to include engine flush kits as standard equipment on their sportboats beginning with 2021 models.

Adding engine flush hose connections improves the convenience of flushing an engine. The great ease of use will likely increase implementation and thus reduce the transmission of AIS between water bodies. It's expected that this simple installation will also cut down the time required at decontamination stations, which is beneficial to boat owners and station operators alike.