The Future Of Boats & Boating

BoatUS Magazine editors predict what recreational vessels — and boating in general — will look like in the year 2044. 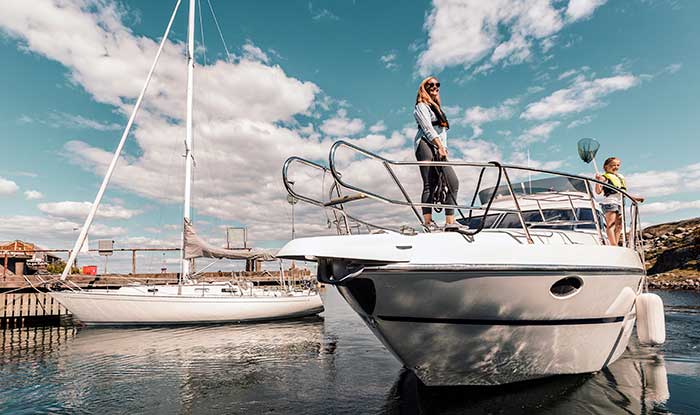 Mark Corke, Associate Editor: I think that what we will see in the future is more and more integration. The world of boat electronics is changing at a head-spinning pace, and I see the boat of the future as a fully integrated entity with everything monitored and controlled from a touchscreen display at the helm. I'm predicting something of a slowdown in terms of navigation and the integration of sailing instruments. After all, there is only so much you can do with GPS.

The real game-changer is going to be in digital switching and control of peripheral devices — from entertainment to bilge pumps and everything in between. Gone will be huge switch and breaker panels, replaced by touchscreens. Some manufacturers are already offering boats like this. It's only a matter of time before it becomes standard throughout the industry.

Charles Fort, Associate Editor: While there will be technology that will make boating easier, like auto-docking and predictive part failure notifications, I also believe propulsion will be quite different. Many boats depend upon automobile technology for their engines and those are going to be vastly different. Fuel cells and new types of batteries such as supercapacitors will power very efficient electric motors and give as good a range as a tank of gas. Propulsion maintenance will be vastly simplified because of fewer moving parts and far less gas and diesel usage.

Hulls, too, will change. Hydrofoiling boats will become common because they use far less fuel to go faster. Electronics, such as Volvo's Active Ride Control could eventually adjust foils on the fly to find the best efficiency and comfort for all sea conditions.

With autopilots, boats are in some ways ahead of cars when it comes to self-driving capabilities, and with the addition of more sensors such as LIDAR, boats will be capable of pretty much any maneuver including docking, anchoring, and even trailer loading autonomously. It's not a stretch to think that your boat could be summoned to get you at the guest dock when you're ready for an outing. While that may sound dangerous to the Luddite, it's easy to see every boat communicating with every other boat (just like cars will eventually have to do if they are to become truly self-driving) using a much more sophisticated AIS-type receiver/transmitter. Easily available and inexpensive satellite internet will make this possible anywhere in the world.

Boating itself may look far different as well with fewer people owning boats yet more availability of boats for anyone, especially with self-driving features. While some people will still want to own a boat, there will be innovative new ways to boat. Sit on the dock and digitally hail the next available autonomous rental boat on the lake? Pool your "boat shares" to take out a ski boat with friends? New generations coming online in 25 years may have vastly different ways of having their boating adventures. We can't wait to see what technology and new ideas bring to boating.

Lenny Rudow, Fishing & Electronics Editor: The boat of the future will probably look a lot like the automobiles we're expecting to see hit the streets in the next decade or so. Self-driving and self-parking abilities are both likely to play a major role, but as part of a larger push toward complete autonomy. In Amsterdam, a company called Xomnia is already experimenting with autonomous boats. And meanwhile, a collaboration between MIT (Massachusetts Institute of Technology) and the Amsterdam Institute for Metropolitan Solutions is in the midst of a five-year research initiative developing completely autonomous robo-boats.

Another trait similar to what's coming in the automotive world that one can expect to see in boats is complete integration between the helm station's digital brain and all of the boat's systems, all being operated via digital switching. But will it go even further?

Will heads-up displays (HUDs), which are transparent displays that present data in the operator's field of view, be displayed right on the windshield, like in the cockpit of a spaceship in a sci-fi movie? It's not at all unlikely, and you may be able to change course with no more than a nod and a wink — much less a spoken command. Note that in at least one case (Garmin's new Autopilot Remote), you can already use a simple point-and-shoot gesture to control your boat's course.

It's also fair to expect that in 25 years, even the simpler, less expensive boats hitting the market should wake up to become part of the IOT (the Internet of Things) before they ever even reach the water. This is already true on cutting-edge yachts. But a tech trickle-down can be expected and, eventually, even a 20-foot center-console will likely text you when its battery level drops or the bilge pump kicks in.

What kind of technology do you think your boat will have by the year 2044? We'd like to know what you think! Continue the conversation on Twitter. Tag @BoatUS and use #BoatUSfuture