If you plan to spend any time in the Mediterranean — or merely want to hold your boat perpendicular to a dock or shore — use this docking technique. 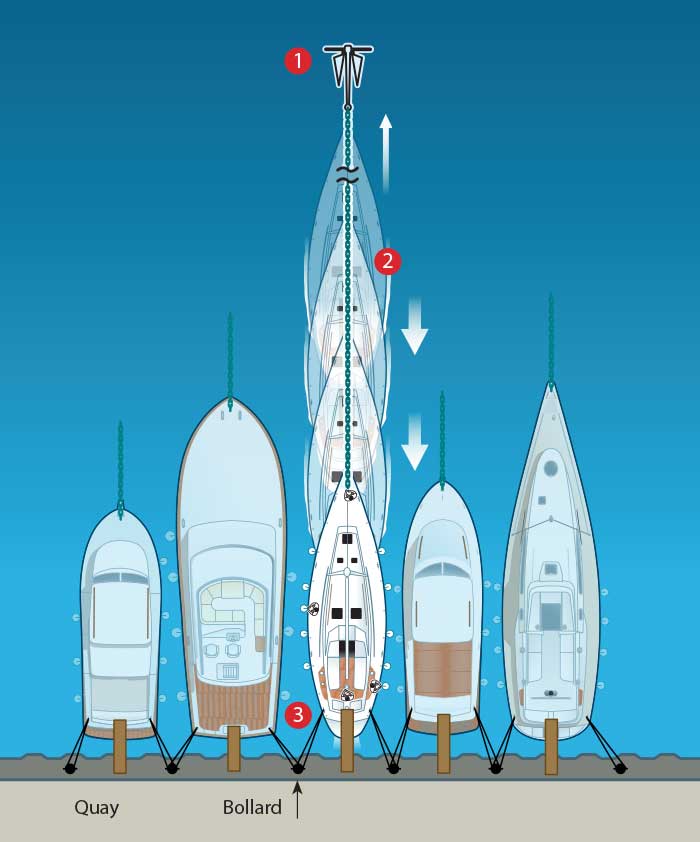 1. At seven to eight boat lengths from the quay, lower the anchor so it hangs about 3 feet above the bottom. Begin slowly backing while simultaneously paying out rode. When the anchor skims the bottom (at least four to five boat lengths from the quay, although more is better if you have room), pay out more rode feeling for bite, cleat off the rode, then secure the anchor with a quick burst of reverse. 2. Release the rode, then continue backing, paying out anchor chain to ensure proper scope. 3. Place the mooring lines around the bollards and secure to vessel's stern cleats. Check your anchor. (Illustration: ©2018 Mirto Art Studio)

Mediterranean mooring, often called "Med mooring" for short, is a technique that got its name from the region where it's common practice. Rather than coming alongside a slip or pier beam-to, boats tie stern-to, at a right angle to the quay or dock. At first glance, it looks tricky. Though newbies may feel anxious, good preparation, practice, and remaining calm are key. Virtually all boats in the Med have anchor windlasses and use all-chain anchor rodes, which makes the maneuver easier and safer: An all-chain rode, as well as the anchor itself, will hold the boat's bow in place. There are three critical elements for a successful Med-mooring outcome.

How to Tie a Cleat Hitch

Before you enter the harbor, if you're towing a dinghy, stow it on deck. You won't need it to get ashore, and it will not only get in the way, but present a damage hazard. Check your charts. It's critical to know depths both near the dock and farther out, where you'll drop your hook. Check the bottom conditions; avoid areas of bad holding or rocks, which can foul your anchor.

As you come into the harbor, you'll likely see boats already tied to the dock. Don't rush for a space. Circle a few times to size up the situation. If there's an empty space, will your boat (beam plus deployed fenders) fit? If there's one empty space in an otherwise busy harbor, ask yourself why: There could be an uncharted underwater obstruction or shoal. If possible, circle close enough to ask skippers of neighboring boats for local knowledge before attempting to dock.

There are certain instances when you'll see one or two boats moored bow-to the dock, but this is strongly discouraged. Getting on and off the boat is difficult, and leading the anchor from the stern can create critical problems.

Once you've found a likely spot, brief the crew on your intentions and assign them to various stations. Assign one crew member to the bow whose only job is to lower the anchor, pay out rode, and snug the anchor line/chain at the end of the procedure. Place fenders on each side of the boat so that as you come alongside other boats, you won't do any damage to them or to your boat. Ideally, station one person on the port side and another on starboard to keep a lookout and alert the skipper if something is amiss. It's also a good idea to have each of these crew members hold a "roving" fender that can be dropped between boats to avoid a nasty bump.

Caution: Advise your crew to keep hands and feet clear when backing in; never attempt to fend off using either hands or feet — use a fender! If they must push off another boat, they should do so from shrouds, not lifelines or stanchions, which can bend or break. If you have thrusters, use them to stay lined up.

Prepare the docking lines on the aft quarters and have them ready to run ashore. You'll need lines long enough to reach around or through the bollard or cringle on the dock and double back to your aft-quarter cleats. Lead one end of each line outside stanchions and lifelines, then through the stern chocks to your stern-quarter cleats. Secure the lines to the cleats using either a cleat hitch (preferable) or a bowline loop. (Note: Tying proper cleat hitches to stern cleats is critical for both ends of your docklines when Med-mooring. Otherwise, lines can work free, or jam if you have to leave quickly or in strong winds.)

Start the maneuver. Assess wind direction. If there's much wind blowing or current running on your port or starboard side, it's best to be upwind or up-current a little so that as you back in, the wind will align you correctly with your chosen space. Consider your boat's prop walk when in reverse, which is its propensity to track either left or right depending on what direction your propeller turns. Pay careful attention to the placement of anchors and rodes of boats near you, making sure the spot you've selected to drop your hook is clear and your ground tackle won't foul either their anchors or chains as you drop anchor and back in.

With the boat about seven or eight boat lengths away from the dock, and the stern pointing toward the space you want to occupy, have the bowman pay out anchor chain until the hook is hanging about 3 feet above the bottom. (You'll know the depth in that area from having checked the chart). Slowly begin backing toward the dock, and slowly pay out more rode. Keep moving or you may lose steerage; some boats need a fair bit of way on before they'll respond to rudder commands. If you face aft, rather than trying to look over your shoulder, you may find steering corrections more intuitive.

When the anchor skims the bottom (this should be at least four or five boat lengths from the quay), have the bowman pay out the rode as the anchor digs in and then "hold" on the windlass, if it's designed for it. (If you don't have a windlass or an all-chain rode, cleat the anchor line off.) At the helm, set the anchor with a quick burst of reverse. When the hook is set, have the bowman resume evenly paying out rode as you back in. All crew members should continue to be alert for other boats' anchors and chains, and be alert for floating lines or debris in the water that could foul the prop.

When you are about 4 or 5 feet from the quay, be ready to deploy lines. One crew member on each side should hold only enough loosely coiled line to easily throw ashore, and should be poised and ready to deploy it. Never attempt to throw the entire coil of line. Throw a manageable amount, then very quickly pay out the rest to the person waiting on the dock.

Always toss the prepared windward line first to a dock master or helpful boater waiting on the dock. Don't throw too soon! If nobody is waiting on the dock, a crew member will have to step ashore, either via a slightly lowered passarelle (a "gangplank" between boat and dock) or directly from the stern. If so, you'll need to get the boat a little closer in. If you don't have a passarelle, secure a fat fender across the transom to avoid inadvertent hits while docking, or from boat wakes or other harbor turbulence once you're tied up.

The person ashore should secure the windward line first, passing it around the dock bollard or through the dock cringle and quickly tossing it back to a crew member aboard. Once the windward line is secured to a stern cleat with a cleat hitch, deploy the leeward line using the same technique. Adjust the anchor rode and stern lines so that your transom is centered in your space and the stern is roughly 3 feet from the dock.

Finally, check your anchor. The chain should be taut with a catenary of about 40 to 45 degrees. If the chain is limp and vertical, gently take up slack with the windlass until it's taut and at the correct angle. If it doesn't get taut, your anchor likely isn't holding well; you'll need to pull out and redo the docking maneuver. Once the boat is secure, lower the passarelle, if you have one, to the quay. Now you can step ashore and come and go with ease!

Mark Corke is an associate editor at BoatUS Magazine. Kostas Ghiokas is a naval architect, professional skipper, and RYA-licensed Yachtmaster in Greece. "Meet" him in our feature " Cruising The Greek Islands".