Here are 8 telltale signs that a used boat could be a storm-damaged lemon. 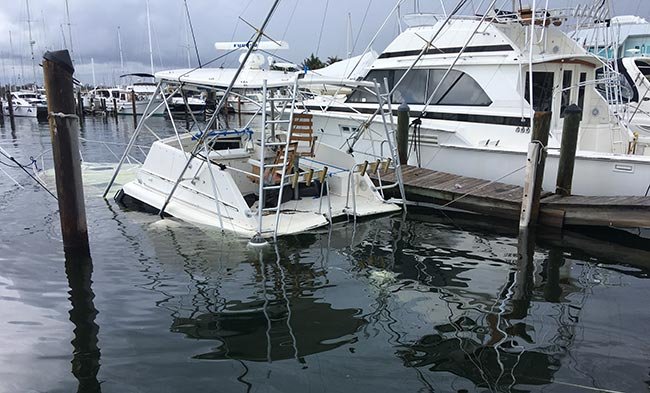 When an insurance company declares a boat a Constructive Total Loss (CTL), it means the boat was heavily damaged. Whoever buys it from the insurance company knows up front what he or she is getting. Some storm-damaged boats will be properly repaired, but many more will be patched up just enough to sell, leaving the new owner with what could end up being an unusable boat. Hire a marine surveyor to inspect any used boat you're considering, especially near areas that had many storm-damaged boats. Here are tips to help you spot a boat that might have been badly damaged in a storm.

1. Trace the history: When a car is totaled, the title is "branded" as salvaged or rebuilt, and buyers know up front that there was major damage at some point in the car's history. But only a few states brand salvaged boats, and some states don't even require titles for boats. Anyone wishing to obscure a boat's history need only cross state lines to avoid detection, which can be a tipoff. Look for recent gaps in the boat's ownership, which may mean that it was at an auction or in a repair yard for a long time.

2. Look for recent hull repairs: Especially on older boats, matching gelcoat is very difficult. Mismatched colors around a repaired area are often a giveaway, and may signal nothing more than filler under the gelcoat, rather than a proper fiberglass repair.

3. Look for new repairs or sealant at the hull-to-deck joint: Boats that bang against a dock during a storm often suffer damage there.

4. Evidence of sinking: Check for consistent corrosion on interior hardware, such as rust on all hinges and drawer pulls. You might be able to spot an interior waterline inside a locker or an area hidden behind an interior structure.

5. Corrosion in the electrical system: Corrosion on electrical items, such as lamps, connectors, and behind breaker panels, might mean the boat sank recently. Does the boat have all new electronics? Why?

6. Look for evidence of major interior repairs: Fresh paint or gelcoat work on the inside of the hull and engine room is usually obvious. All new cushions and curtains may be a tipoff, too.

7. Look for fresh paint on the engine: It may be covering exterior rust as well as interior damage.

8. Ask the seller: In some states, a seller isn't required to disclose if a boat was badly damaged unless you ask. If the seller hems and haws, keep looking.